Insolvency and Bankruptcy Code, 2016 [Hereinafter referred  as “IBC”] was passed in both the Houses of Parliament with a major objective of providing single window for insolvency and liquidation procedure.

Let’s try to understand the importance and significance of IBC with an example:

Mr. A (Creditor) has lent money to XYZ Co. with a repayment schedule over 5 years. After 2 years, XYZ Co. was unable to pay the money borrowed due to  business  failure  and declared as insolvent by the competent authority. Now Mr. A wants to recover the amount from the XYZ Co. and filed a petition against the company. The course of action and due procedure before and after implementation of IBC is as follows:

Before introduction of IBC

After introduction of IBC

The above example is illustrative purpose only, in reality the process may involve much more number of laws, regulations, adjudicating authority and process which are very time consuming in nature resulting in delayed conclusion of proceedings. 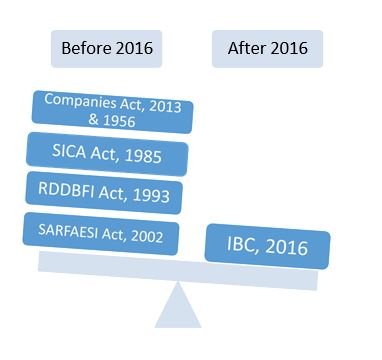 However, not every claim is eligible for making an application under IBC. Initially the monetary limit was 1 Lakh but the same was increased to 1 Crore with effect from March 2020 due to the impact of Corona on business.

An overview of IBC:

IBC has 3 terms namely Insolvency, Bankruptcy and code. The terms Insolvency and Bankruptcy can explained with the help diagram. 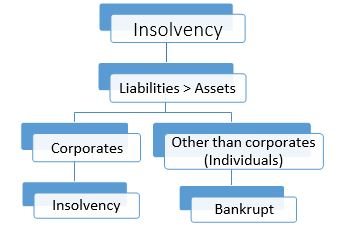 The provisions of IBC applies to the following

Understanding the meaning of Claim, right to payment and right to remedy

In the above case, both the SBI Bank and Mr. Ram has to make the  claim for  the  dues payable on or after 31.12.2021. Unless both the parties make any claim, there is no debt. Once there is no debt and there is no claim, IBC proceedings cannot be initiated.

Initiation of CIRP in case of Financial Creditors (SBI Bank)

Corporate Applicant has to make an application to NCLT for CIRP against the default committed by the CD along with necessary attachments. In case, the CD being a

Time limit for completion of CIRP is 180 days. However, such time limit shall be extended beyond 180 days and up to 90 days with 66% of voting share of Committee of  Creditors [CoC] provided that CIRP shall be completed within 330 days from insolvency commencement date.

Withdrawal of application: The NCLT may withdraw application made under section 7 or 9 or 10 when an application for withdrawal is made with 90% voting share of the CoC.

Once application is accepted the following will take effect:

1. Declaration of Moratorium: Suspends all the suits or litigations, acquisitions  or material changes to assets, any enforcement  under  SARFAESI  Act,  2002  and Acquisition of leasehold property by owner or lessor in possession of CD. However, the concept of going concern is not disturbed and essential goods or services are not prohibited. Moratorium will be in effect till the completion of CIRP.

After admission of CIRP by the Adjudicating Authority, an IRP shall makes public announcement within 3 days from his appointment and calls for submission of claims from the stakeholders in

Whenever there is default by the CD, here the idea is to nullify the default and ensure that

the creditor is paid appropriately by evaluating various plans. Evaluation of such plans are entrusted to Resolution Applicant. In case, where the assets of CD are not sufficient to discharge the liabilities, then the only option left is to liquidate the company and discharge the liabilities which is entrusted with Liquidator. The entire procedure is handled by the RP i.e., Resolution Professional.

CIRP begins with declaration of Moratorium and concludes with the order of NCLT. An overview of the same is as follows: 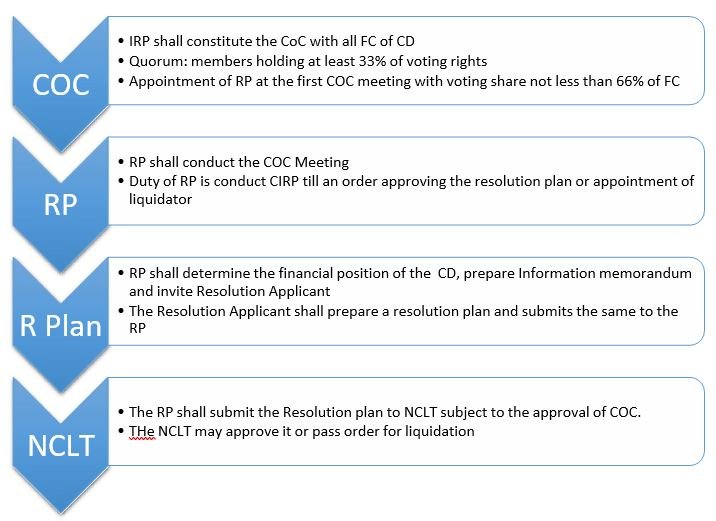 means a memorandum prepared by the RP containing relevant information of the CD for formulating a Resolution Plan.

The Resolution Applicant is the person who  submits  a Resolution Plan either individually or jointly with any other person.

The Resolution Applicant shall submit the Resolution plan to RP. RP will present the same after its examination to the CoC for its approval. The CoC can approve the Resolution Plan by a vote of not less than 66% of the voting share of the FC.

Key difference between CIRP and PPIRP:

With the effect of IBC, the insolvency and liquidation procedure has been fastened and the time consuming has been drastically decreased.